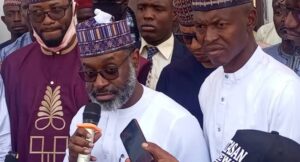 The governorship candidate of the Social Democratic Party in Katsina State, Alhaji Ibrahim Zakari Talba has flagged off his gubernatorial campaign with a promise to rescue the people of the state from insecurity and other social ills if elected governor in next year’s general elections.

Addressing a rally at the SDP campaign office in Katsina, Ibrahim Talba explained that the party’s manifesto centres around the need to empower the people by transforming the education, healthcare, agriculture, infrastructure and other sectors of the economy.

He said he has the requisite experience to provide the right brand of leadership at a period when the state was facing numerous social, economic and security challenges.

“We are here to contribute our quota as indigenes of Katsina State, we are not in the race to wrestle power from the ruling party but to rescue the people of Katsina State.

“Everyone knows the situation the country has found itself, we cannot deceive ourselves that everything is going well, that is why we are in the race, we have to rescue our people”, Talba said.

He also expressed confidence that SDP will beat other party’s in all elective positions in the forthcoming elections.

It would be recalled that Ibrahim Talba had defected from the ruling All Progressives Congress, APC, and joined the New Nigeria Peoples Party, NNPP, where he contested in the guber primaries in June.

He however dumped the party following its primary elections where he accused the party chieftains of conspiracy to favour one of the candidates.

Subsequently he defected to the Social Domocratic Party where he emerged gubernatorial flag-bearer.