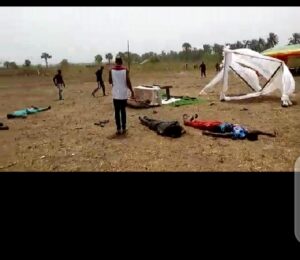 No fewer than ten persons have been allegedly killed by yet to be apprehended hoodlums in Ebenebe community of Awka North local government area of Anambra state.

The incident which took place during a burial ceremony at Umuogbueshi village, Ebenebe threw the entire area into confusion as sympathizers scampered for safety during the attack.

According to eye witnesses, the mourners and sympathizers gathered for the burial ceremony of the deceased, named Ozor when the hoodlums in their numbers stormed the venue and started shooting on the people.

They also shattered the casket which was lying in state for interment with bullets while killing and injuring several persons.

The late thirty-four year old man who lives in a neighboring state , contested for chairmanship position of a transport union and won the position after several persons were allegedly gunned down during the process.

Ozor was shot dead in December 2021 leading to the family fixing the burial for Saturday 26th of February in his hometown, Umuogbueshi village that shares boundary with Agbaja in Enugu State.

An indigene of the community, Mr Ezikel Okafor, while describing the incident as very unfortunate, said the gun shots were heard even from outside the venue, leading to many scampering for safety.

He advised youths to shun act of violence but rather engage in meaningful ventures that would not bring reproach to their families .

The traditions Prime Minister of Ebenebe, Chief Joe Nwegwu, said that they were attending elders council meeting at the palace when the news filtered in, bringing the meeting to an abrupt end.

Onowu Nwegwu while describing the incident as barbaric said many others were injured with bullet wounds and were taken to the hospital for medical attention.

He hinted that plans were on by the elders of the town to immediately convene a townhall meeting where the youths would be strongly advised to learn from the burial incident and be of good behaviour.

Confirming the incident in a press release,the Police Public Relations Officer in Anambra state, Mr Tochukwu Ikenga said information was received by the command about meyhem unleashed by cultists on rival mission at a burial of a notorious cultist known as Ozor in Ebenebe, Awka North Local Government Area.

The statement however said on the spot assessment indicate that not less than five suspected cultists were killed in cold blood while some of the corpses had been removed by their relations.

It says that the Commissioner of Police, Mr Echeng Echeng is miffed at the cold hearted ness of criminal elements in the society who have no read for the sanctity of the life of their fellow citizens.

The Statement promises that the perpetrators of the crime will be hunted until they are brought to book.
NDEKE