The Aspirants in company of their supporters this morning stormed the APC secreteriat at Ajiosun Ado Ekiti to show their grievances.

Addressing newsmen, the Aspirants alleged that the process of conducting the primary election had been manipulated in favour of a particular Aspirant.

They also claimed that the election materials had been tampered with in the middle of the night in favour of a particular Aspirant.

The Aggrieved Aspirants however called for cancellation and requested for a fresh one in the interest of the party. 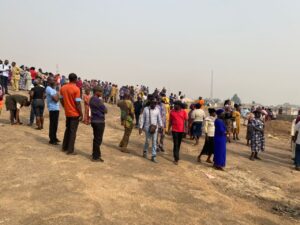 Kebbi 500,000 out of school children back to school

Kebbi 500,000 out of school children back to school