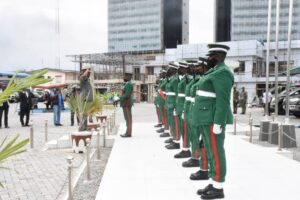 As part of its routine activities, the Nigerian Army has formally disengaged some senior officers from its service.

The colourful event which held at the Nigerian Army School of Artillery-NASA in Kachia Local Government Area of Kaduna State attracted dignitaries from all walks of life who came to rejoice with the retired senior officers and their families.

Speaking on behalf of the retired senior officers, Major General Abubakar Fada expressed gratitude to God and the Nigerian Army for the previlege to serve the country for over three decades.

Major General Abubakar Fada advised serving officers and men of the Army to continue to be loyal and continue to demonstrate total commitment to duty as exemplified in successes recorded so far in the fight against criminal elements.

The retired senior officer stressed the need for the Army to always embrace changes in doctrine, training and general dispositions to ensure successes in all operations.

He also called for the sustainance of inter-agency synergy to ensure successes in various operations.

Major General Fada commended the Artillery corps commander in his effort at piloting the corps in the right direction in terms of ongoing developments in corps and urged him to sustain the tempo.

TARABA: Fire Destroys Over N200M Worth of Yams