ATIKU: If elected Ajaokuta will come on stream 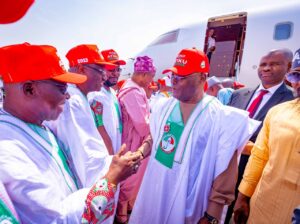 The presidential candidate of the People’s Democratic Party, PDP, Alhaji Abubakar Atiku has assured the people of Kogi state that if elected president he would complete the Ajaokuta Iron and Steel complex and the Maritime port in the state.

Speaking in Lokoja at a campaign rally, the former Vice President explained that he was in the race to rescue the country from poverty, adding that he would set aside 10 billion US dollars for job creation and entrepreneurship.

According to him, the issue of University closure and “our children out of schools for eight months would no longer be there.”

He vowed that if voted as the next president of the country, owing salaries would be a thing of the past.

Earlier, his running mate, Dr. Ifeanyi Okowa ,who is the Governor of Delta State, called on the Kogi people to vote to enmass for the People’s Democratic Party, saying that the people had suffered enough.

The National Chairman of the party, Dr. Iyocha Ayu expressed joy as he formerly received some people who said they decamped from the APC to the PDP including a former deputy governor of Kogi state, Chief Simon Achuba, a former Speaker of the Kogi State House of Assembly, Mr. Alfa Imam and a notable politician in Kogi central, Mr Yahaya Karaku.

Dr. Ayu urged the people of the state to rally around and vote for all the PDP candidates in the election, stressing that Alhaji Atiku Abubakar was ready to rescue the country from poverty and move it forward.

The senatorial candidate of the party, Mrs. Natasha Uduaghan said the people of Kogi state were ready to vote against bad governance from the state and vote in the PDP.

She said the uncompleted Ajaokuta Iron and Steel Complex was an issue of great concern to the people of the state adding that the only person who could complete the project was Alhaji Atiku Abubakar.