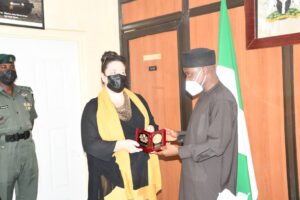 The Minister of Defence Maj Gen Bashir Salihi Magashi (rtd) is seeking renewal of the existing bilateral Military agreements between Nigeria and France to reflect real-time security related needs of the two Countries.

General Magashi stated this when the Ambassador of France to Nigeria Emmanuelle Blatmann paid a courtesy call on him at the Ministry of Defence Headquarters, Ship House, Abuja.

He said Nigeria and France are strategic partners and pointing out that the partnerships need to be rejigged to take it to higher levels of operability and deliverabilities.
The Defence Minister therefore welcomed a more proactive intelligence gathering mechanism and technological support to drive new information sharing regime in aid of the Military Campaigns in the country.

The general went further to ask for technological transfer to galvanise the nation’s Military productive capabilities in the sector.
The Ambassador of France to Nigeria Emmanuelle Blatmann who was accompanied on the visit by the Defence Attache, Embassy of France in Nigeria, Colonel Guillaume Dujon thanked the Defence Minister for the audience aimed at strengthening the existing bilateral agreements between the two Countries.

While requesting for technical interface between the two parties to examine critical areas of mutual benefits in the proposed rebirth of Memorandum of Understanding, she gave assurances that her Country will reinforce efforts to end terrorism in Nigeria and Piracy in Gulf of Guinea.
The Ambassador commistrated with the Nigerian Armed Forces over those who paid the supreme price inline of duty defending the Nation’s territorial integrity and sovereignty.
Signed-