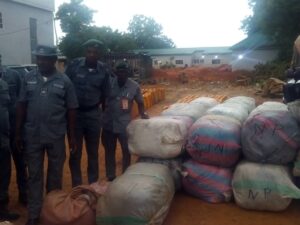 The Kebbi state Area Command of the Nigeria Customs Service, says, it has generated about one hundred million naira at the Kamba border post within one month.

The Area Comptroller, Joshep Attah, made this known at a press briefing in his office in Birnin Kebbi.

Comptroller Attah, said after re-openning of Kamba border in April, there was some hudles encounter on the revenue drive but latter surmounted.

According to him, there had been an intensified stakeholders engagements to ensure seamless clearance of goods across the border with series of sensitization and town hall meetings in Kamba.

“We also meet with our Nigerien counterpart at Boureau de Douane in Gaya, Niger Republic. To this end the revenue of the command has started picking up”.

The Comptroller revealed that, in line with the agency’s core functions of trade facilitaion, the Command had facilitated the export of goods that include coal, pepper, onions and ginger to the tune of 7,377 tons through Kamba border.

Equally, the Command has also recorded seizures of assorted items with a paid duty value of over fourty five million naira (#45,030,111).

The items include, one Toyota Hilux 2021 Model, 4,125 liters of petrol, 50 Jericans of Vegetable oil, 17 bales of second hand cloths and 98 bags of adultrated fertilizer.

He reiterated the Command’s committment in dealing with smuggling, revenue generation as well as trade facilitation.