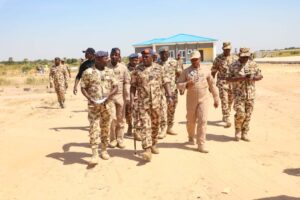 ommanders operating in the North-East and North-West regions to remain resolute and steadfast in the current onslaught against remnants of terrorists and bandits especially in the North.

In a statement by Director of Public Relations and Information of the force, Air Commodore Edward Gabkwet says the Air Chief gave the charge in Katsina while on an operational visit to review and re-appraise current ongoing joint operations in order to re-strategize towards enhanced operational effectiveness of NAF.

Air Marshal Oladayo Amao expressed satisfaction with the current operational momentum deployed against terrorists and bandits in the regions which has led to the elimination of several key terrorists’ leaders and their cohorts.

He commended the commanders and their men for their gallantry and loyalty in these endeavours, and urged them against being complacent in the fight against banditry.

The Air Chief noted that the new platforms being expected into the inventory of NAF in the first quarter of next year and beyond, would no doubt add impetus to ongoing operations, and urged them to sustain professionalism and responsiveness in the discharge of their roles.

While assuring them of continued support to effectively execute the operations, Air Marshal Amao also assured of federal government’s commitment to their welfare and well-being.