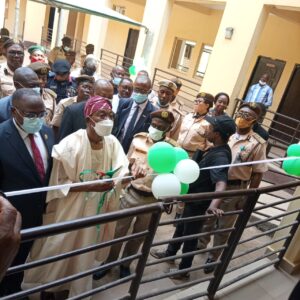 The Federal Government says the enhanced e-passport regime in the Nigeria Immigration Service will stem out corruption in the system.
The Minister of Interior, Ogbeni Rauf Aregbesola who stated this at the inauguration of the e-passport production center in Enugu, South east Nigeria explained that Passport production over the years have been characterized with so many challenges ranging from corruption, late issuance and , touting .
He said though Successive administrations have evolved different measures to reduce the practice to the barest but to no avail.
Ogbeni Rauf Aragbesola said this measure would go a long way towards ending the menace
The Minster emphasized that never again would money be accepted for payment of any service
The Acting Comptroller General of Immigration, Isa Jere, at the event said, all backogs of 14021 passports would be cleared before the end of this month.
The governor of Enugu State, Ifeayi Uguwanyi represented by the Secretary to the State Government Prof Simeon Otuanya appreciated government for establishing the center in Enugu and promised to collaborate with the command to ensure conducive operational environment.