The incident according to witness happened on sunday 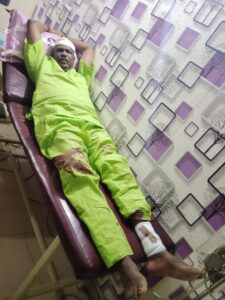 between Isan and Ayede Ekiti around 9pm when the monarch was said to be returning from a meeting.

Witnesses said the gunmen attempted to kidnap the monarch but perhaps met some resistance a situation that led to him being shot several times.

As at the time of this report, the monarch is receiving treatment at an undisclosed hospital.

He said the monarch was coming from Ijero Ekiti when the incident occurred as against speculations in some quarters that he was returning from Isan Ekiti.

Mr Abutu said efforts were on top gear to track down the perpetrators while he confirmed that the monarch was responding to treatment.

PMB Has Fulfilled One Of His Cardinal Promise By Signing Electoral Act Amendment Bill Into Law- Barr. El-Sudi