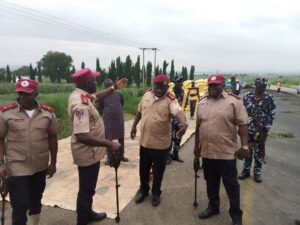 Nineteen people have been confirmed dead and eight others injured in a fatal road accident that occured at the early hours today at Yangoji-Gwagwalada Highway of the Federal Capital Territory.

Speaking to Newsmen at the scene of the accident, Acting Corps Marshal Dauda Ali-Biu said two Toyota Hiance buses and a Citeron trailer conveying animal feeds collided on motion and bursted into flames and killed the whole passengers on board.

According to the acting Corps Marshal, the whole nineteen corpses were trapped but extricated by rescue operatives of zebra 6 Yangoji.

He said that the Nigerian Police Force Kwali division and Personnel of FRSC had commenced investigation and met relevant authorities for the mass burial of the remains of the nineteen extricated mutilated corpses.

The FRSC Boss also commended the personnel of the Nigeria Police Force for prompt assistance during emergencies.