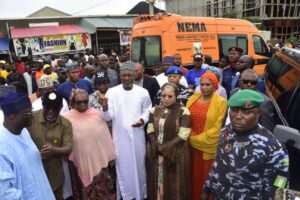 The Minister of State FCT, Dr Ramatu Tijjani Aliyu, has commiserated with families affected by the Kubwa building collapse.

At the scene of the incident, The Minister who thanked the first responders and institutions of the FCT Administration for their tireless work in rescuing affected persons., Stressed the need for people to abide by the development Guidelines to prevent such occurrence

Dr Aliyu while wishing the injured speedy recovery, prayed for the repose of persons who died in the unfortunate incidence.

She further encouraged all Nigerians to always patronize professionals to guard against the consequences of patronizing quacks.

According to the Minister, a committee would be set up to investigate the root cause of the collapse, as well as carry out integrity test on the building.

Also speaking, the Director Department of Development Control , Murktar Galadima who described the situation as unfortunate, said the rescue team had so far rescued the people from the collapsed building, with two confirmed dead.

On his part, the Coordinator, Abuja Metropolitan Management Council, Umar Shuaibu blamed the incident on quackery and sharp practices of some developers .

In a remark, rhe Senior Special Assistant on Monitoring, Inspection and Enforcement to the FCT Minister, Comrade Ikharo Attah, said the owner of the property was fore-warned by concerned residents, but refused to listen

Comrade Attah said the FCTA had the policy and power to revoke any collapsed building land for conversion into a park or garden for residents around the neighborhood.