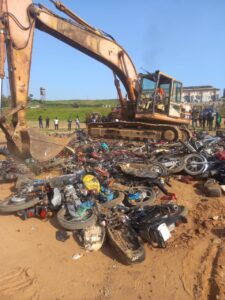 The Federal Capital Territory Administration has confiscated and crushed over 200 motorcycles of some defaulting riders in Durumi , FHA Lugbe and Piwoyi Communities in Abuja.

The Joint Enforcement Task team also raided and nabbed some recalcitrant operators at Lokogoma roundabout allegedly said to be constituting environmental and security threats to lives and property in the nation’s Capital.

His words:”This is a developing city that is guided by planned policies of government, which we must not allow any lawless person to set backward. The FCTA will now be more determined than before, because of the security and maintenance of the plan of the city, so we can have good city that all Nigerians will be proud of.On behalf of the FCTA , let me re-echo that we will never watch people, who do not have respect for the law to overhaul the good citizens” Candido Warned.

Also speaking, Senior Special Assistant on Monitoring, Inspection and Enforcement to FCT Minister, Comrade Ikharo Attah, pointed out that the issue of Okada is more of a security threat than commercial or transportation problem in the Territory.

Attah, hinted that one of the newly recruited male officers of the DRTS “between 25-30 years old” was brutally killed by okada operators that attacked the officers, after a raid at Area 3.

“just three weeks ago around the same area, one of the personnel from DRTS was stabbed and killed by the Okada riders… “one of us was badly injured in the neck, but thank God he is stable while recuperating”.Attah Said.

“just three weeks ago around the same area, one personnel from DRTS was stabbed and killed by the Okada riders, one of us was badly injured in the neck, but thank God he is stable while recuperating”.
We are assuring that we keep putting in our best to ensure that this city is very safe . Durumi is very notorious, and their activities is prohibited …and the Minister is extremely grateful to all agencies involved in the exercise”

The Director, Directorate of Road Traffic Services,(popularly know as VIO) Abdullateef Bello disclosed that the service confiscated and crushed about two hundred motorcycles to serve a deterrence to others especially the recalcitrant operators.

He explained that the exercise was in line with policy that prohibited their operation within the nation’s capital city since 2006.