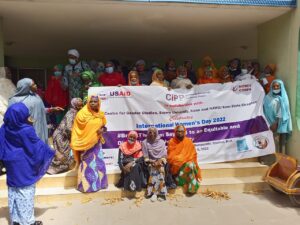 Gender equality and inclusion has been identified as critical in facilitating enabling environment for peace and stability in Nigeria.

The representative of a non governmental organization,mercy corps community initiative to promote peace(CIPP),Hajiya Amina Bello made the assertion during a one day interactive session to commemorate international women’s day 2022, organized by Mercy corps in collaboration with center for gender studies Bayero University Kano and NAWOJ,held in Kano.

According to her,the session targets women with disabilities,media and representatives of government and civil society organizations across the state.

In her remarks the,vice president zone A, Nigeria association of women journalists (NAWOJ),Hajiya Halima Musa described the rejection of the five gender bills by the national assembly as unfortunate.

She appealed to members of the federal legislature to as a matter of urgency to discard their earlier posture and allow the gender bills to be reconsidered and passed into law.

“Until the gender bills are reconsidered and passed into law,Nigeria cannot be seen or considered to be a full democratic nation”

Also speaking the Kano state chairperson of NAWOJ,Comrade Bilkisu Ado Zango, represented by her vice, Hajiya Maryam Magaji Hamid described the interactive session as apt, due to the problems bedevilling women especially those with disabilities.

She reiterated the associations readiness to partner with relevant stakeholders in uplifting the standard of living among women.