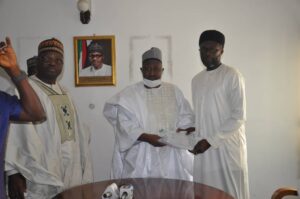 The All Progressives Congress, APC, Ekiti State Governorship Primary Election Committee, says it has carried out its assignment successfully.

Chairman of the Committee and governor of Jigawa State, Alhaji Badaru Abubakar stated this while briefing Journalists at the party’s secretariat in Abuja after submitting the election report.

He said series of consultations were held ahead of the exercise with all the aspirants regarding the guidelines which they agreed to and were carried out to the latter.

Governor Badaru expressed concern that some of the aspirants discredit the exercise, stressing that the committee ensured the election was conducted to the best acceptable standard.

However, reports indicate that seven of the aspirants will present a protest later to the National Leadership of the party in Abuja next week.