GROUP : Calls on Jonathan to defect to APC 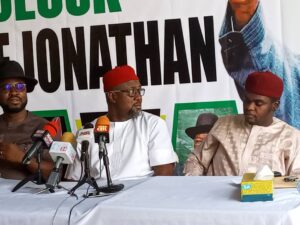 The Push for former President Goodluck Jonathan to succeed President Muhammadu Buhari in 2023 has received a boost as some of his supporters have called on him to defect to the ruling All Progressives Congress, APC to achieve the dream.

The supporters who are members of Citizens Network for Peace and Development , CNPD , said they want Dr. Jonathan to dump his party, the Peoples Democratic Party (PDP) and join forces with President Buhari in APC to return to power in 2023.

Addressing newsmen in Abuja, the national coordinator of CNPD, Mr. Okorie Raphael, said they were ready to mobilise at least eight million citizens to return the former president to Aso Rock.

The supporters insisted that Jonathan remained the best candidate to take over from President Buhari for the sake of continuity and his track record.

They further noted that with the level of mutual ethnic mistrust in the country, what Nigeria needed is a time tested and trusted man like Jonathan to steer the ship of the nation.

One division Nigerian Army says it has launched several offensives against bandits and other criminal elements within its area of responsibility.