The International Committee of Red Cross, ICRC has sought the collaboration of the Ministry of Humanitarian Affairs, Disaster Management and Social Development in resolving 24,000 requests of missing persons made by Nigerian families. 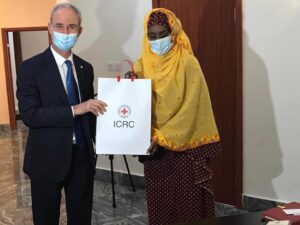 he Vice President of the ICRC Gilles Carbonnier made this known in Abuja when he paid a courtesy call on the Minister,Hajiya Sadiya Umar Farouq.

Mr. Carbonnier who stated that a total of 2.2m Displaced persons were domiciled in the North East also offered the services of its Central Tracing Agency in finding missing persons during disasters as well as the forensic management of the dead during emergencies.

“We have received 24,000 requests from Nigerian families who came to us to ask for news of their daughters or sons who are unaccounted for. We seek to work with different entities to progress in the resolution of these missing cases. In Africa, this accounts for half of the case load of missing persons on the continent”

We celebrated the 100th anniversary of our Central Tracing Agency that deals with identifying missing persons and reconnecting them with their families. In that framework, I think that it will be good for Nigeria to have an inter -ministerial mechanism where these cases of missing persons can first be registered in a central data base he added.

n her response, the Minister of Humanitarian Affairs, Disaster Management and Social Development Hajiya Sadiya Umar-Farouq appreciated the International Committee of Red Cross for its numerous humanitarian works in Nigeria especially in the North East and their provision of support and succor for the displaced persons affected by disaster.

The Minister said the Federal government has approved the National Policy on Internally Displaced Persons and is also working towards the domestication of the Kampala Convention.