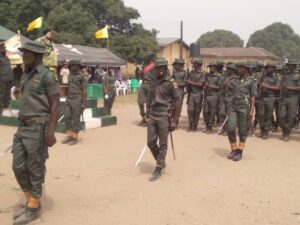 The Nigerian Correctional Service says it will continue to build the capacity of the officers and men of the service to enable them to contain emerging security challenges in the country.

The Controller General of Corrections, Mr. Haliru Nababa stated this in a message to the passing out parade of the second batch Armed Training Course at the Nigerian Correctional Service Arms Training School Owerri, Imo state.

He said the training came at a time when the Service was witnessing attacks in its correctional facilities and urged the newly graduated personnel to be more committed to duty.

Mr. Nababa who was represented by the Assistant Controller General in charge of Zone E, Owerri Mr. Sunanu Kinane noted that the Service had witnessed remarkable improvement under this watch and warned that he would not tolerate indiscipline and unprofessional conduct in handling weapons.

The Commandant Correctional Service, Arms Training School Owerri Mr. Charles Esan said the participants were in addition to other things trained in basic weapon handling, introduction to combat, power race and combat maneuvers to equip them for the task of maintaining internal security.

He commended the Controller General of the Service for according priority to training and re-training of personnel noting that the new graduates will complement the efforts of those in the field in stemming the tide of attacks on the custodial centres and facilities.

Correspondent Chinazo Ilechukwu reports that the twelve weeks course was attended by three hundred personnel drawn from various correctional centres across the federation.