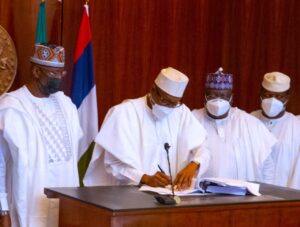 national Republican Institute, IRI and the National Democratic Institute NDI said elections conducted by the INEC after the signing of the new electoral act has shown that the electoral umpire had improved significantly in discharging their mandates.
At a joint news briefing in Abuja, after observation mission of the Ekiti and Osun States governorship elections, the institutes noted that the surge in voter registration and the increased in voter turnout in Osun poll was an indication that Nigerians have renewed their interests in political participation.
A member of the Delegation, a Senior Associate for Africa and Regional Director for Central and West Africa Dr Christopher Fomunyoh, emphasized that the 2023 present Nigeria opportunity to improve on her democratic system.
Another member of the delegation, a former minority leader of the Sierra Leone Parliament Dr. Bernadette Lahai, said the various reforms in the new electoral act would reduce disputes in Nigeria’s electoral processes.
On her part, the Regional Deputy Director for Africa at IRI Jenai Cox, stressed the need for INEC and Security agencies to collaborate to address the menace of vote buying and other electoral offences during elections.
The delegation also called on political parties to ensure the implementation of gender inclusivity to participation of women in politics.

AFCON 2021: Quarter-final to be moved after 8 die in stampede