The Kebbi State Deputy Governor, Rtd. Col. Samaila Yombe Dabai, has debunked rumour that, he was held captive by bandits at Kanya village in Danko/Wasagu Local Government area of the State on Tuesday.

Narrating his ordeal to newsmen at his residence in Bir 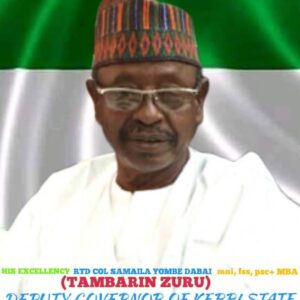 nin Kebbi after he escaped bandits attack, the Deputy Governor lamented the spate of informants to the security challenges in the area.

According to him, Informants are disguising in public revealing movement of troops as well as vigilante groups whose bravery mission is to tackle the menace of insecurity.

The Deputy Governor has been regularly in Zuru recently in an effort to be part of military operations that has been taking place in the area to tackle banditry activities in the area.

Col. Yombe Dabai, accompanied by the Commanding officer 223 light Tank Battalion Zuru, were returning from various military formations with the intent to boost their morale as well as needs assessment when they were ambushed by the bandits at Kanya.

“My presence at the battle field was always out of passion to see a safer or free environment where communities would farm and do their business activities without hitches”.

He commended the bravery of the 223 Battalion military men and vigilante groups for their rapid response whenever the need arises.

The security aide attached to the Deputy Governor, ASP Idris Libata along side 18 other military personnel lost their lives in Tuesday attack.

The Deputy Governor, prayed for the repose of the soul of his security aide alongside the military personnel and all those that gave their lives in defence of their territory saying, they shall be remembered for bravery forever.

ABU Cries Out Over Encroachment Of It’s Land By Kaduna State Government.