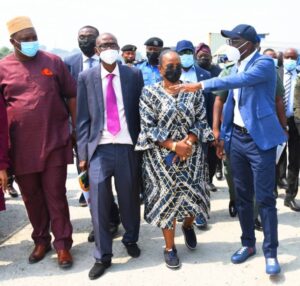 The Lagos State Government has commenced the construction of a bridge to link Opebi to Ojota, as part of efforts to decongest traffic in the Ikeja axis and on Ikorodu road.

With a total length of three point eight nine kilometres, the project is designed to provide direct link between Opebi, Mende, Maryland and Ojota to Ikorodu road, reducing the perrennial traffic on Mobolaji Bank-Anthony way, and setting precedence for Ojota commuters to link the 3rd Mainland Bridge.

At a ceremony to officially kickstart the project, Governor Sanwo-Olu described it as a legacy of his administration to ease the burden of commuters

Initially conceived over twenty years ago, Governor Sanwo-Olu charged the contractor handling the project to
complete it in eighteen months, instead of the twenty months completion date earlier given.

He said: “This is to demonstrate that politics is not about lip service. We have committed substantial resources to the provision of quality roads, waterways, and rail infrastructure to the people of Lagos, just as we have invested in modernisation of infrastructure inherited from the previous administration”

The Governor announced that his administration had also acquired three
sets of trains for the blue line which traverses Okokomaiko and Marina, in addition to the ten coaches recently purchased for the Red rail line.

“To give the people commuting options, we initiated the construction of a 37 km track rail project which is steadily progressing, in addition to the complete overhaul of our water transportation system so that we can achieve an efficient and safe transport system that suits our megacity status and befits a 21st century economy.” he said

Mrs Adeyoye assured Lagosians that the contractor had been duly mobilised.

“To give a sense of definition as to limits, the Link Bridge project would start from the Opebi U Turn and span across the gorge to drop at the intersection of Odo Iyalaro Bridge and approach from Ojota New Garage near Mende along Ikorodu Road. The Bridge and Approach Roads is also designed to convey traffic from Odo Iyalaro into Maryland as well as towards Ojota New Garage on Ikorodu Road through an Underpass. The approach roads will greatly enhance vehicular movement towards Opebi/Allen/ Mobolaji Bank Anthony Way via Sheraton Link Bridge / Kudirat Abiola Way and its environs just as it would reduce incessant traffic gridlocks being experienced over the years in the area” she explained

The member representing Ikeja Federal Constituency in the House of Representatives, Mr James Faleke, who spoke on behalf of the residents, applauded Governor Sanwo-olu for the landmark project and solicited the expansion of the Omole-Berger road due to the high capacity vehicles plying the route.