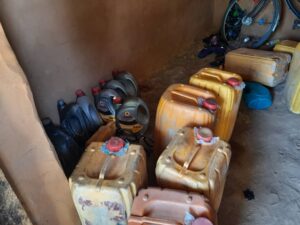 The long queues in some filling stations in Zamfara State have begun to reduce following the ultimatum given by the Department of State Service,DSS to fuel marketers to end the scarcity,
believed to be artificial.

Radio Nigeria Correspondent in Gusau Sani Dutsinma who monitor some filling stations within and out the state capital report that, some independent marketers have closed their filling stations while others selling it at the cost of N280 to N290 per litre.

In Gusau, the Zamfara State capital,
It learned that, some filling stations around the ancient city were still shut down with black marketers selling the product at N300 per litre, as some independent marketers patronizing them collecting some money before giving them the product in Jerry cans and other containers.

In Gusau, independent marketers openly flouted the directives given by DSS and Zamfara State Task force Committee on petroleum allocation and sells as black marketers continue to have a field day with their containers.

However, most of the major marketers sold between N179 and N185 per litre but they are few as most of them remained closed.

Some of the motorist who wanted to buy the products said the queues were not too long but the problem is the higher price of the commodity as well as the attention given to those who want bought it in containers, that is black marketers.

When contacted, the Chairman, Independent petroleum marketers Association, IPMAN Zamfara State, Alhaji Surajo Kamba said their is no NNPC Depot that have the product available for them to buy, that forced them to buy it from private depots at the cost of 225 naira per litre and above.

He added that, there is other expences, there is also delay in transportation as well as lack of payment of bridging allowance from the authorities concern among others, and called on federal government to do something to address the issue.

Surajo kamba therefore, attributed the current scarcity to federal government and the Nigerian National Petroleum Company, NNPC for failure to make the products available for its members at affordable prices.