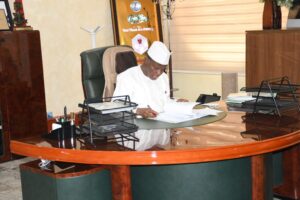 General Magashi stated this when the new Commandant of the Air Force Institute of Technology, AFIT Air Vice Marshal Mohammed Aminu Yakubu paid a courtesy call on him in his office at the Ministry of Defence Headquarters Abuja.

He told the Commandant to prioritise Research and Development, R & D that are relevant to the needs of the Nigerian Armed Forces in the academic programmes of the Institution.

The Defence Minister opined that through R&D new empirical findings that will raise the bar of the Nation’s Military Technological prowess will be emplaced.

While congratulating the Commandant for his well deserved appointment he expressed confidence in his astute performance to explore new academic areas that are relevant to the training needs of the Military officers and personel as a degree awarding Institution.

The Commandant, Air Vice Marshal Mohammed Aminu Yakubu who assumed the Command of the Air Force Institute of Technology, AFIT on 10th January outlined the challenges of the Institution in meeting the infrastructural and academic standards envisioned by its founding fathers.

AVM Yakubu solicited the support of the Minister to gain access to the take-off grants meant for AFIT since the Act upgrading its status to a university was signed by President Muhammadu Buhari in 2017.

Other areas of concerned put before the Minister by the Commandant include hostel accommodation and Lecture theatres deficits to cope with the rising student population currently put at four thousand with additional two thousand prospective intakes.

Air Vice Marshal Mohammed Aminu Yakubu who was born in Yana, Shira Local Government area of Bauchi State in 1967 was commissioned to the rank of Pilot Officer in September 1990 after his graduation from NDA as a member of 37 Regular Course where he had Bsc in Physics.
AVM Yakubu holds Msc in Strategic Studies from NDU Islamabad, Pakistan and he is a Fellow of Air College, Karashi, Pakistan.
Until his present appointment as Commandant AFIT, he was Air Officer Commanding, AOC, Grand Training Command, GTC, Enugu.

The Federal Government says, no preferred bidder has been selected for the national carrier, Nigeria Air.

The Federal Government says, no preferred bidder has been selected for the national carrier, Nigeria Air.