by Babagana Muhammad
in Education, News
0 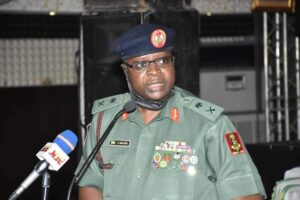 The National Youth Service Corps, NYSC, wants Corps Producing Institutions in the country to ensure that only credible graduates are mobilised for national service.

NYSC Director-General, Major General Shuaibu Ibrahim stated this while addressing participants at the 2022 Batch “A” Pre-Mobilisation Workshop with the theme, “Enhancing the credibility of the mobilisation process through effective data control”, held in Abuja.

General Shuaibu said data generated from the Corps Producing Institutions was the raw material processed for mobilisation, and berated the selfish motives of some players along the production chain.

He however said the Scheme had evolved techonogically-driven control measures.

“This is a call to action for the Students Affairs Officers to be above board in the discharge of their responsibility of handling data generated for NYSC from the Corps Producing Institutions”, he said.

General Shuaibu appealed to relevant stakeholders to deal with some of the recurrent challenges that were capable of undermining the credibility of the process.

In an introductory address, the Director, Corps Mobilisation Department, Mrs Victoria Ango said the Pre-Mobilisation Workshop was instituted by the NYSC Management to create room for stakeholders to come together to review previous performances and identify weaknesses and strengths for quick remedy and better performance.

She stated that the Scheme in recent times had stepped up the mobilisation process through deliberate efforts to ensure that both old and new schedule officers renew their commitment towards overcoming flaws.

Mrs. Ango warned that NYSC would not take further excuses from Corps Producing Institutions about data manipulation in its Corps mobilisation process.

Alhaji Bello, whose address was presented at the workshop by the Director, Youth and Social Development Secretariat, Mrs Asabe Abubakar assured that the FCT administration would continue to partner with the Scheme for the successful implementation of its lofty programmes.

“I would like to affirm that the modest achievements of our administration are attributed to the cooperation and support of critical stakeholders, including the NYSC”, the Minister said.

Representatives of collaborating agencies like Joint Admissions and Matriculation Board, the National Board for Technical Education, the National Universities Commission, Federal Ministry of Education, SIDMACH Technologies, among others were in attendance at the workshop.