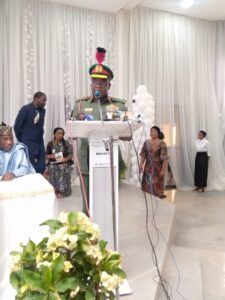 Nigerian Defence Academy-NDA in collaboration with the University of Ibadan have comissioned a centre for early warning studies aimed at building a robust national database on threats to national security.

The event was part of activities lined up for the Academy’s annual International Conference with the theme, “Defence, Security and Sustainable Development in Africa: Challenges and Responses”.

Commandant of the NDA, Maj.-Gen. Ibrahim Manu Yusuf, explained that the centre would collect remote and longitudinal data on the causes and incidences of violence, criminality, terrorism and insurgency in Nigeria.

He maintained that the centre was established with a view to alerting relevant stakeholders on potential dangers and assist themin taking appropriate actions.

Major General Yusuf noted that the centre would add value to the nation’s intelligence and security architecture by providing data that would drive a national policy and strategy.

The Commandant pointed out that the centre would have two main research hubs based in the University of Ibadan and the NDA, serving the Southern and Northern parts of Nigeria, respectively.

Earlier, Chairman of the conference, Prof. Munzali Jibril, said this year’s International Conference would address the dynamics of, and nexus between defence, security and sustainable development in Africa with focus on challenges and responses at unilateral, bilateral and multilateral levels.

Delivering his lecture, Prof. Abiodun Alao of the centre for African Leadership United Kingdom, observed that of all solid minerals, one of the most controversial was diamonds, largely due to the huge financial benefits attached with its acquisition.

He explained that controversies surrounding solid minerals have caused further complications for defence and security as they have been linked with other major challenges like money laundering and smuggling.

Highlight of the event was the conferment of honorary fellowship on wife of the President, Hajiya Aisha Buhari and Commandant of the NDA, by the Society of Peace Studies and Practice.

The Federal Government has given the joint technical committee set up to re-test the viability of the University Transparency Accountability Solutions,