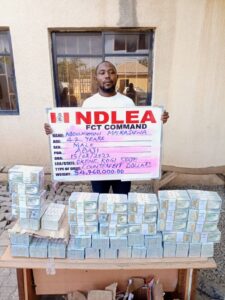 Operatives of the National Drug Law Enforcement Agency, NDLEA, have foiled attempt by a syndicate to push into circulation fake $4.7 million cash.

The amount which is about N2.7 billion was intercepted Friday last week in a consignment sent from Lagos to Abuja at Abaji area of the Federal Capital Territory.

Giving a breakdown of the fake foreign currency, the spokesman for the NDLEA, Mr. Femi Babafemi says, a controlled delivery of the parcelled counterfeit US dollars totalling $4, 760, 000.00 led to the arrest of a principal suspect, 52-year-old Abdulmumini Maikasuwa.

The seizure according to him, followed intelligence received by the FCT Command of the Agency detailing the movement of the cash and the vehicle conveying it.

He disclosed that, the Chairman, NDLEA, Brig. General Buba Marwa (Retd) has directed that both the cash and the suspect in custody be transferred to the Economic and Financial Crimes Commission, EFCC, for further investigation.

The NDLEA Chairman, commended the officers and men of the FCT Command for their vigilance and preventing counterfeit $4.7 million from going into the streets.

He charged them and their counterparts in Adamawa, Kwara, Bauchi and others across the country not to rest on their oars.