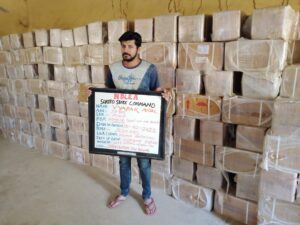 An Indian businessman, Vyapak Nutal has been taken into custody for interrogation by operatives of the National Drug Law Enforcement Agency, NDLEA, over the smuggling of 134,700 bottles of Codeine syrup into the country through the land border between Nigeria and Niger Republic in Sokoto state.

The suspect had loaded the consignment into trucks in Cotonou, Benin Republic and drove through the land borders via Niger Republic before entering Sokoto state at the Illela border.

According to a statement by the NDLEA spokesman, Femi Babafemi, the suspect settled in a hotel in Sokoto state and credible intelligence reveals that Nutal began to look for buyers for the controlled drug.

He says, while operatives were on his trail, officers of the Department of State Security were able to apprehend him and swiftly handed him over to NDLEA on Wednesday 10th February 2022.

In a related development, attempts by drug traffickers to export large quantities of Heroin, Methamphetamine, Khat, Tramadol and Cannabis through the Murtala Muhammed International Airport, MMIA as well as three courier companies in Lagos have been frustrated by narcotic officers who intercepted the illicit consignments.

At the Lagos airport, operatives on Tuesday 8th this month arrested one Felix Rotimi Eshemokhai with 1.75kg heroin while trying to board Royal Air Maroc to Casablanca, Morocco while another trafficker, Okafor Emmanuel Onuzuruike was also nabbed same day during his bid to travel on RwandAir to Dubai with 2.2kg of Cannabis concealed in food stuff.

KANO : PROPERTIES WORTH OVER 18 MILLION NAIRA RAZED BY INFERNO