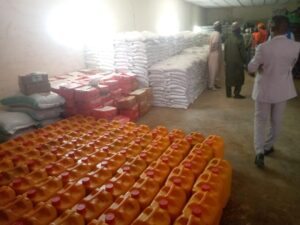 The National Emergency Management Agency, NEMA, has donated relief items that include over 15 trucks of staple food and some non-food items to victims of flood disaster in Katsina State.

While handing over the relief items to the state Emergency Management Agency in Katsina, the Director General of NEMA, Alhaji Mustafa Ahmed said the assistance was part of the relief package approved by President Muhammadu Buhari to victims of this year’s flood disaster across the country.

The Director General of NEMA who was represented by the Director Finance and Accounts of the agency, Alhaji Sani Jiba explained that the relief items also include five and a half trucks of maize, five trucks of sorghum and two trucks of millet which were released from the federal government’s strategic food reserve.

“Mr. President approved the release of 12,000 metric tons of staple foods from the strategic food reserve for distribution to flood victims in the 36 states and thr FCT.

Alhaji Jiba explained that the NEMA delegation has met with Governors Aminu Bello Masari and expressed the federal governments condolence over the displacement and distruction of property caused by floods in the state.

“The governor has given us his assurance that the relief items will be distributed to victims of flood disaster across the state.

“I also acknowledge the effort of the Katsina State government for providing the first line of support to those affected by the flood disaster”, Jiba said.

The relief items were received by the Executive Secretary of the State Emergency Management Agency, Alhaji Babangida Nasamu on behalf of the state government.