The Federal Government has been advised to introduce progressive and wealth taxation on billionaires and invest proceeds from such taxation in local and sustainable food production to make the country less dependent on food importation. 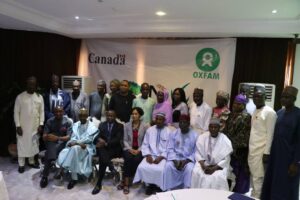 The Country Director, Oxfam Nigeria, Dr. Vincent Ahonsi gave the advice in Abuja at the Closeout and evidence dissemination event of the Livelihoods & Nutritional, LINE, a 7-year Agricultural project funded by the Global Affairs Canada and implemented by Oxfam Nigeria in Bauchi state.

He explained that the country’s annual national budget allocation to Agricultural Sector in 2022 was abysmally 1.7 percent which called for the need for government at all levels to explore other avenues to fund the sector for sustainable food productivity.

“Over six trillion has been budgeted in the 2023 budget for tax incentives that they will not allow corporations to pay tax, these are monies you need to help the people to put in Agricultural,education and health. We say Nigeria should not do that, when you give them tax incentives they dont come back to plug their gains into the system ” he said

According to Dr.  Ahonsi, the LINE Project had promoted food security, enhanced gender justice and reduced poverty in six local Government Areas in the three senatorial districts in Bauchi state.

The Head of Development Cooperation High Commission of Canada to Nigeria Djifa Ahado, said the project which achieved 90 percent of its outcome included more women Participants that had internalised the knowledge gain to support their families and communities .

“Participants in the project seem to have internalised the knowledge gain through the training and are using it to support their families and communities in ways that go beyond the original intention of the project. Likewise, for the capacity to advocate for their rights and priority needs which are now more systematically relayed to local government and private sector actors.”

One of the Beneficiaries from Gamawa, local government area of Bauchi state, Hassana Adamu expressed appreciation on the outcome of the training and improved seedlings she received which has boost her economic status.

“We have nurseries that we plant for two weeks with the seedling that was given to us. And people outside the community will come and buy from us and it is now a source of income to most women in our local government” she said

The permanent secretary, Ministry of Agriculture, Bauchi state, Mr. Yakubu Abdullahi pledge to expand the gains of the project to the other 14 local government areas of the state to upscale farming activities and make the state a major contributor to national food security.