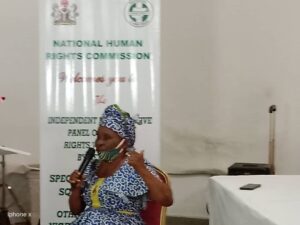 The Nigeria Police Force have prayed the Independent Investigative Panel on alleged human rights violations by the defunct Special Anti-robbery Squad to dismiss the case of alleged extra-judicial killing of one Mr. Patric Oche for lack of merit.

Counsel the Police, Mr. James Idachaba made the plea at the panel sitting in Abuja.

Mr. Idachaba maintained that the petition was unsubstantiated as the complainant failed to properly identify the indicted officers in the matter.

He therefore described the petition as vague since the complainant; Mrs. Mercy Oche only indicted the Nigeria Police Force as an institution.

Counsel to the complainant, Mrs. Wadundi Okoh, however, sought to amend the petition as she now had the names of the indicted officers.

The case was adjourned for adoption of report.

Another case of extra judicial killing of two brothers, Collins and Owen Onaodowan was also heard.

The mother of the deceased, Mrs. Otomerie Onaodowan told the panel that her two children went to watch football match at a viewing center in Delta state on the 16th of August, 2010 when armed robbers stormed the area and started shooting sporadically.

Mrs. Onaodowan said the owner of the viewing center later accused her children of being the robbers and handed them over to soldiers guiding the area.

According to her, the soldiers subsequently handed them over to the police at Ekpan station and that when she got the news and visited the station, the officers told her to come the following day since it was already late in the night.

She said when she and other family members got there the following day; the Divisional police officer told them that her children were dead.

Mrs. Onaodowan pleaded with panel to assist her to get justice for the death of her children.

The acting chairman of the panel, Mr. Garba Tetengi adjourned the matter until the 11th of this month for continuation of hearing and defence.

The Federal Government has given the joint technical committee set up to re-test the viability of the University Transparency Accountability Solutions,