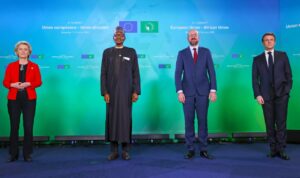 He made the declaration in Lagos at the inauguration of Dangote Fertilizer Plant, which has an installed capacity of 3.0 million metric tonnes of Urea per annum.

The President noted that the plant would further advance Nigeria’s drive towards achieving self-sufficiency in food production, job-creation, increasing the inflow of foreign exchange and accelerating economic growth.

On other benefits of the plant, the President expressed delight that with the commencement of exports to other countries, including the United States, India, and Brazil, Nigeria was already gaining extensively in earnings of foreign exchange from the excess production of, and export from, the plant.

He said with the plant in motion, the government would expect a rise of a new breed of agropreneurs, who would add value to farming and make the nation self-sufficient in food production.

President Buhari used the occasion to reassure Nigerians that his administration was focused on providing an enabling environment for the private sector to thrive, pledging continuity in improving infrastructure, power and security, as well as enacting relevant laws and regulations to drive investments in the economy.

He hoped to go back to inaugurate the group’s refinery and petrochemical plant later in the year.

Lauding Dangote for helping to rebrand Nigeria through his mega investments across Africa, President Buhari said he was proud of his contribution to affirming Nigeria’s leadership status in the continent, and wished him many more successes in the future.

Earlier, Alhaji Dangote said the fertiliser complex, which occupies 500 hectares and built at a cost of 2.5 billion dollars, would drastically reduce the level of unemployment and youth restiveness in the country, through generation of direct and indirect employment.

He expressed gratitude to President Buhari for his sustained support and encouragement, and for honouring the invitation to come in person to inaugurate the plant.

He also commended leaders of the host communities and their people for providing a peaceful and conducive environment for the project to thrive, recognising the many years of enthusiastic teamwork, labour, toil and sweat of the management and Staff of Dangote Group for their commitment to high performance, perseverance, and resilience.