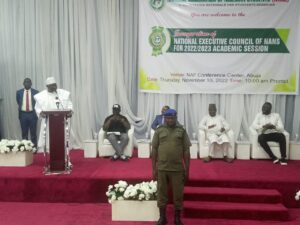 The Governor of Jigawa State, Muhammadu Badaru has given an assurance that the issues related to the half payment to the Academic Staff Union of Universities, ASUU, will be legally addressed by all State Governors.

He gave the indication during the official inauguration of the leadership of the National Association of Nigerian Students, NANs in Abuja.

Governor Badaru explained that his Government would continue to support students and stabilize the education sector through NANS.

The Governor stated that President Muhammadu Buhari was aware of the sufferings of the students caused by the ASUU strike and would not allow such situation again.

“On the half salary, we have already started working on it, by the special grace of God, we will get to the bottom of it, and this will be resolved, we pray there will not be any other strike again ”

“You have suffered enough, and am sure the President is aware of that, and we are looking at legal ways to finalize the salary payment “.

The NANs President, Comrade Usman Barambu called on the Federal Government to as a matter of urgency address all issues relating to their agreement with the Academic Staff Union of Universities to forestall future industrial actions that would keep our students out of campus.

Comrade Barambu explained that those that bear the brunt of the frequent crises were not privileged to seek alternatives and demanded better deal for education of Nigerian masses as most Children of the privilege few now study either abroad or in Private Universities.

The Chairman of the Inauguration Committee, Comrade Olalekun Smart explained that Comrade Barambu scored eighty percent of the votes, and expressed the confidence that his administration would impact positively on the education sector and in the lives of students.

KANO : PROPERTIES WORTH OVER 18 MILLION NAIRA RAZED BY INFERNO