UNODC: To partner Federal Ministry of Women Affairs to assess prevention, response to violence against children by terrorist and violent extremist groups.

The United Nations Office on Drugs and Crime (UNODC) is to partner with the  vthe Federal Ministry of Women Affairs to assess prevention, response to violence against children by terrorist and violent extremist groups. 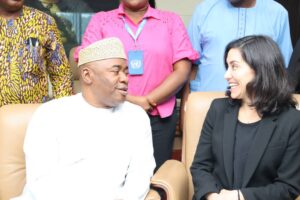 The UNODC team led  by Ms Alexandra Martins, the Head, Global Programme to End Violence Against children during a meeting with the ministry’s Permanent Secretary, Mr Olufunso Adebiyi in Abuja, said the assessment was programmed to be done within the context of STRIVE Juvenile Project which was launched in 2021.

The UNODC team leader stressed the need to ensure appropriate treatment of children associated with terrorist and violent extremist groups with a view to promoting their rehabilitation and reintegration into the society.

According to Ms. Alexandra the UN office was of the opinion that any child formerly associated with terrorist and violent extremist group and in contact with national authorities, including the justice system, has the right to be treated according to specific safeguards.

She added that such a child also has the right to be treated in accordance with applicable international law and in a way that prevents further victimisation.

The  permanent secretary,   Mr Olufunso Adebiyi described issues associated with violence against children as a huge problem and stressed stressed the need to keep out-of-school children off the streets, and to empower the mothers of such children.

He added that “when you do this, you are rehabilitating their mothers, who in turn will take the children out of the streets and draw the children back to themselves.”

The UNODC office had earlier endorsed Roadmap on the Treatment of Children Associated with Terrorist and Violent Extremist Groups for comprehensive guidance.

Femi Gbajabiamila says a second batch of the ammendment to the 1999 constitution will soon commence.