by Babagana Muhammad
in Health, News
0 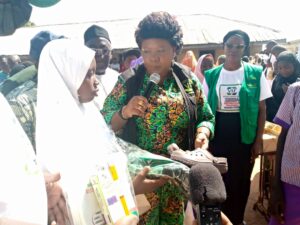 The Victim Support Fund has donated relief materials worth over three hundred million naira to over ten thousand victims of the communal crisis in the Nyakwala Community in the Wukari local government area of Taraba State.

The​ Chairman of the​ Victim Support Fund,​ General Theophilus Danjuma (Rtd), said the gesture was aimed at restoring the lives of those affected by the communal crisis that ravaged the area a few years back.

Retired General Danjuma who was represented by his adviser on administration, Victim Support ​ Fund,​ Mrs.​ Toyosi Ogunsuji, said the gestures followed a request by the District Head of the community and other stakeholders who wrote to him to come to their aide.

He explained that the foundation had made significant progress towards delivering on its mandate of catering to the pivotal needs of victims of insurgency and communal crisis across the nation.

“This project that we are laying the foundation for a block of 3 classrooms, we will come back by the grace of God in the next three months to commission them including the dispensary and the powered solar borehole that has already been installed. The General himself will be here to officially commission them hopefully by February next year,” Mrs. Ogunsuji said.

In his remark,​ Taraba State Governor,​ Darius Ishaku, who was represented by the State Commissioner for Humanitarian Affairs, Mr. Taninga Binga thanked the Victim Support Fund for providing succor and hope to the people of not only Nyakwala Community but the state in general.

The District Head of Nyakwala,​ Chief Joshua Barau commended General Theophilus Danjuma and the Victim Support Fund for considering the community to benefit from the foundation’s restoration program.

On her part, the Executive Director, of VSF, Prof. Nana Tanko advised the beneficiaries to make good use of both the items and other projects that are ongoing in the community under the restoration projects program of the VSF to better their lives.

Mr. Ubandoma Dan’asabe, who represented the Taraba State Emergency Management Agency (SEMA), appreciated the Victim Support Fund for responding to the cry and the needs of the people of the Nyakwala community, noted that the state government had earlier provided emergency support to the people of the area.

Our Correspondent reports that items distributed including sowing machines, agric inputs, and complete learning materials for primary school pupils, while a foundation for the construction of a block of three classrooms, toilets, and a health care dispensary, as well as rice factory, were also laid by the chairman at the community.

Meanwhile, the VSF had installed a powered solar borehole, distributed N150,000 to each of the beneficiaries, and promised to provide an ambulance vehicle for the community among other things.