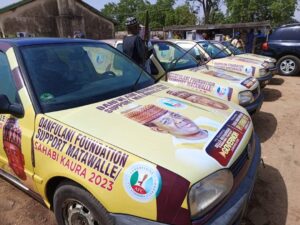 The APC Party Chairman Alhaji Tukur Danfulani Present the vehicles to the beneficiaries at Old Livestock market in Gusau, the state capital.

Alhaji Danfulani said that, the APC in Zamfara is overwhelmed by the increasing number of support groups wishing to join in the quest to return governor Matawalle in office for the second term come March, 2023

He noted that, there is need for individual and corporate groups to be supported to meet up with logistics challenges during Electioneering Campaigns.

The APC Party Chairman also expresses appreciation to the support that the party is receiving in the state, giving assurance that the party will not disappoint the people especially the electorate and assured them more developmental
projects.

Speaking on behalf of the beneficiaries, an astute Politician Sani Biggy said, they have been strongly encouraged with the support, which according to him will make it easier for them to cover the state soliciting support for the governor.

According to him, the good works of the governor has touched all sectors of the state and are now left with no option than to compel the citizens to support and vote for Governor Matawalle and other APC Candidates across the state.

PDP: Leader must be with clean record