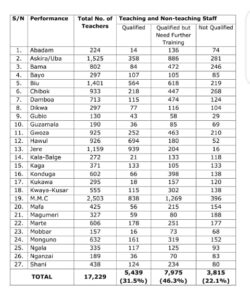 *Only 31% competent enough to teach
*3,815 teachers untrainable
*2,389 teachers without any qualification
*Only 14 teachers qualified in particular

… Gov says he won’t sack but will transfer

Borno State Governor, Professor Babagana Umara Zulum, on Thursday, described as “very scary” some findings submitted to him by a Committee he had constituted and tasked with conducting basic literacy and numeracy competency assessment of 17,229 Local Education Authority teachers across 27 Local Government Areas of the State.

The State’s Commissioner for Education, Engr Lawan Abba Wakilbe, presented the committee’s report to Governor Zulum at the Government House in Maiduguri. Members of the committee including chairman of the state Universal Basic Education Board, Bulama Kagu, a professor of education, was in attendance.

The Committee had engaged academics from different eduction stakeholders in the State before and during assessment tests conducted in January, 2022, across the 27 Local Government Areas of the State.

The report however revealed that 7,975 teachers representing 46.3% were found not fully competent but trainable.

The report also revealed that 2, 389 teachers representing 13.9% have been teaching without any formal qualification from any institution.

The report further said out of Kala-Balge’s 272 teachers, only 21 are competent to teach with 118 untrainable and 133 trainable.

Speaking after receiving the report, Professor Zulum described the findings as “very scary”. He said the Committee members had informed him that came across an NCE holder who could not write NCE during the test but yet teaching students.

“We cannot move Borno forward unless we are able to sanitize our public schools system and If I am able to sanitize education, I would have achieved 50% of what I set out to achieve as Governor”, Zulum said.

He noted that he decided to set up the assessment Committee after series of spontaneous assessments of teachers during his regular unscheduled trips to Local Government Areas.

Despite the report, Governor Zulum assured that he will not sack the 3,815 untrainable teachers but he will, depending on the recommendations made by the Committee, consider approving the transfer of the teachers to areas where they can perform other tasks such as tree planting at the Ministry of Environment.

President Muhammadu Buhari has welcomed the inclusion of Nigeria among the six countries in Africa designated as manufacturing bases for the Covid-19 vaccine.

OVER 224 THOUSAND DROP OUT CHILDREN RETURNS TO SCHOOL IN NIGER.